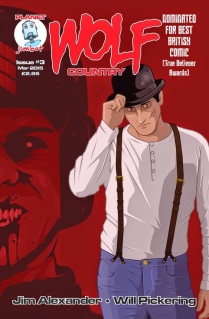 From the publisher blurb:

Vampires v Werewolves in a wild west setting – and a lot more’ continues, having been shortlisted for Best British Comic (b/w) at the Eagles/True Believers award; longlisted at the British Comic Awards and voted as a Top 10 book in last year’s London Super Comic Con.

Has it really been a year since the last issue? Jim and his talented team have certainly been busy in that time and it’s nice for me to see the third issue of Wolf County.

Issue 03 pick up pretty much where 02 left us last time, so if you haven’t read that issue you may want to contact planetjimbot@gmail.com to get hold of copies.

Okay, stuff you may need to know about the set-up. A world that appears to be run by Vampires with a big ol’ dose of religion has a region known as ‘Wolf Country’ inhabited by… Werewolves. The majority of the vampire world is reflective of modern society but Wolf Country exists in a setting more like that of the Wild west. The vampires have a settlement called… Settlement that is within Wolf Country. The leader of ‘Settlement’ has been called into the big city to have his faith in the universe questioned. Meanwhile a group of military types stationed in Settlement are on patrol in Wolf Country when… and that’s about as much as I can say here. 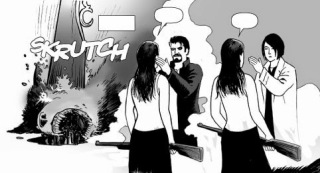 The series is beginning to pick up some pace now as the setting is becoming more understood and the tale Jim wants to tell is beginning to unfold. Wills artwork is fantastically well suited to this- his understated storytelling really helps with the grounding of the strip- it has a real feeling of place to it that I find adds to the overall whole.

My only wish would be for a catch up box on the inside cover. New readers could well be confused, which is a shame as this is possibly my favourite of the titles from Planet Jimbot- and I am very much looking forward to the next issue- just don’t leave it a year!

The cover to Zarjaz 23 is by one of Tharg’s absolute finest droids- the extraordinary Mark Harrison.

Thanks to Mark for providing us with our first Anderson cover since the ‘0’ issue of Zarjaz 10 years ago!

With only a week to go till the launch of FutureQuake 26, now is a good time to share the cover!

The cover for this issue was provided by Matt Soffe, based on the strip ‘The Shepherd’ that will open the issue.

Thanks to Matt for such a great image.

FutureQuake 26 will be on sale from March 1st. 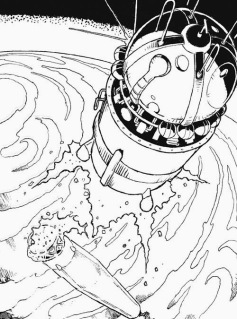 Coming later this year to the pages of FutureQuake, What Am I Bid For The First Man In Space? is by creators Mark Howard and George Coleman. 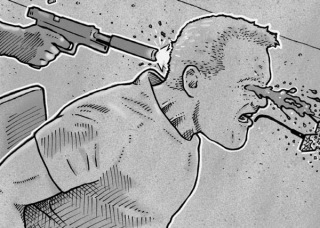 coming to the pages of FutureQuake in 2015, The Immortal Lives of Working Men is by Rhys Ware and Joe Palmer.

Hang Him is by italian creators Marcello Bondi and Marco Arzilli. The strip will apear in Something Wicked 11, on sale in November 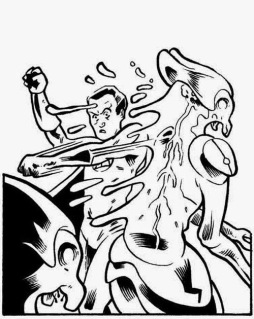 Coming to the pages of FutureQuake in 2015, RETIREMENT Day is by Daniel Bell and Alfie Gallagher

Leading Zarjaz 23 is Aderson PSI- In The Line Of Duty by Lee Robson and Alfie Gallagher.
Alfie was kind enough to provide us with the above promo art (Click for a larger view) and the strip art is just as good. 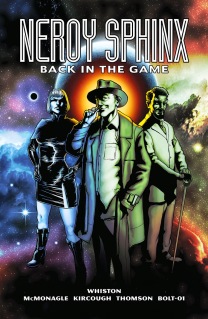 NEROY SPHINX- Back in the game.

Celebrating 10 years of publishing, FQP are proud to present our first trade. Neroy Sphinx- Back in the game collects all the tales from FutureQuake 04-20 under one cover along with two new tales!

Almost 100 pages of high quality SF action with an introduction by JAMES LOVEGROVE. 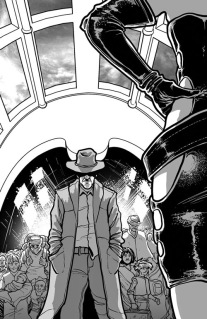 All the strips have been relettered and the artwork has been remastered by Johnny McMonagle, James Kircough & Dave Thomson to make sure that when you read NEROY SPHINX- Back in the game you are left with no doubt that FQP really is the home of the finest new talents in comics. Available from April for a mere £5.00 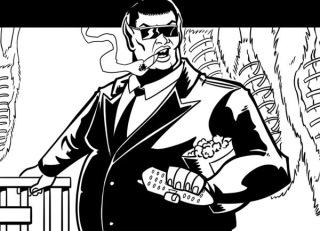 Meet Phat Toonie, he’s not a nice man- in fact he’s downright nasty, and in the pages of Zarjaz 23 you will get to see that first hand in a rare Future Shock. The Ballad of Phat Toonie is by JJ Robinson and Mike Bunt.